[DISCLAIMER: This post was scheduled for JUN 01; however, technical difficulties created a delay in the process. OKAY! I was the technical difficulty. I procrastinated with doing the research, which put me late into the morning before getting started with the writing, and then my granddaughter’s ballet recital was at 1:00. After that there was shopping and eating; before I knew it, it was past my bedtime. So here I am at 6:00 AM on Sunday, trying to get two posts in before noon. I got this!]

My mother, God bless her, made a statement recently that made me catch my breath. She told her friends, “My children are all Senior Citizens, now.” 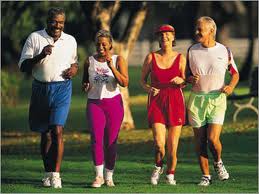 WAH? When did that happen?

Once I hit 50, I began to realize I was getting old. Mentally, I felt half my chronological age, but physically, I noticed the changes. I felt the onslaught of hot flashes (I prefer the term “power surge”), my skin began to sag and look dry, no matter how much lotion I slathered on, and my hair was thinning.

I was in denial for a long time. I didn’t bother to change my lifestyle. I kept doing the things I had always done: exercising sporadically, drinking alcohol more than occasionally, and maintaining my constant diet of M&Ms and Diet Coke, fast food, and fatty snacks. I was overweight, but not obese, so I figured when I was ready, I would work off the excess pounds and everything would be fine.

Recently, I made a post about setting goals and holding yourself accountable. I’ve been working toward those goals, but I’ve never had the discipline to actually be a competitive athlete until I began fulfilling one of my goals: to run a 5k in every state in the United States. In the past year, I have competed in two 5K road races, and plan to complete several more before the year’s end. It’s something I started doing with my younger daughter.

I’ve always been athletic, but never competitive. When I ran (more like walked) my first 5k, I had just recovered from a nasty sinus infection and bronchitis. My time for completing the race: an impressive (not) 47:00 minutes. Although I came in ahead of about 100 other competitors in my age group, I was still 300 runners behind first place. I swore I would train for the next.

While searching online for a training program, I ran across this list of rules for training for a 5K over at http://www.triradar.com. [source: www.triradar.com/training-advice/olympic-coaches-8-golden-rules-of-training]  These rules are flexible and doable.

The term “GOLDEN” got me to thinking. Since I am now a “Senior Citizen” (Thanks Mom), I qualify to compete in the Golden Olympics, the Olympic games for senior citizens. So I did some more research. Turns out, the minimum performance standard time for women in my age group is just under 25 minutes. For men, it’s under 20 minutes. I have a lot of work ahead of me. The rules from Triradar.com are a good place to start.

1. Be consistent – I have been consistently inconsistent with my training, now’s the time to fix that.

2. Plan to peak – I have coached youth sports, so I know this to be true. Every athlete reaches a peak performance level, and then will plateau. You want to peak when your performance counts the most.

3. Train with gradual overload – this goes along with being consistent. Start light and work your way up to a slight overload of your physical ability. This will increase your stamina and strength without making you overly sore in the process.

5. Set attainable goals – I can’t run a 5k in under 25 minutes if I haven’t been able to run one in under 40 minutes. So I need to set goals of trimming off a couple minutes every time I train, until finally, I’ve reached my ideal time.

6. Get basic nutrition right – This one’s been tough for me. I love junk food. But, I love being healthy even more, so I’m a work-in-progress where nutrition is concerned.

7. Take recovery seriously – There’s no shame in resting a day, or reducing the intensity of your workouts. Don’t make yourself sick trying to be healthy.

Aging doesn’t have to be synonymous with getting old. Sign up to compete in the Golden Olympics, meet new friends, and share your experiences about aging with those who have chosen to stay active in their senior years.

Take action to become healthy. The sooner you do this, the happier you and your family will be. It’s worth the effort.

You are in control of your health; stop making excuses and take action!

A Blog by Mary Lou Harris

Behind the scenes with equestrian and pet photographer, Trilby Rising

My take and experience on the art of photography and life